When you arrange this sort of event, you never really know what the right mix of people will be. Yes we have cycled together on training rides but spending a week in each other’s company is a different matter.

There were times due to tiredness, exhaustion or sheer frustration when I am sure we could have willingly throttled each other, but on the whole the mix was perfect.

Several of you have asked about the team and their background, so here goes:

Nick took a day off work to lead us out for the first half day. He is probably one of the strongest cyclists I know. Nick took us the first 50 miles at a great pace, taking the pressure off the team.

Nick is a very experienced cyclist with a background in road racing.  He is one of those cyclists that despite being so much more capable than you, he will sit on your wheel or alongside you and chat as you struggle up a climb or go out front and brake the wind (cycling term).

Having Nick with us at the start was just what we needed and set us up for an early finish and a well earned rest. 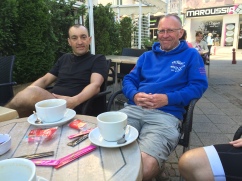 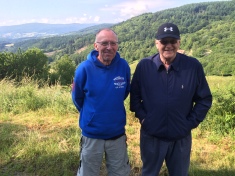 Driver, mechanic and all round Mr Fix It, Bob’s practical abilities were needed on several occasions to change tyres, fix spokes and the odd puncture. Ironically, 1000 miles and we only had 3 punctures!

Bobs jaunty attitude and love of an anecdote made him a ideal member of the team. His speech at the last supper was very emotional and I am grateful he gave up his time to help out. 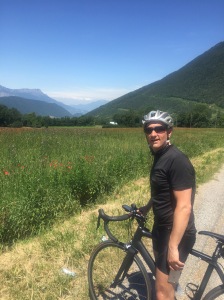 The youngest member of the team, Gary (encouraged by Mike), only started cycling 2 years ago and has already become a superb cyclist, so much so that Mike was overheard saying, “Jesus I’ve created a monster”.

Promoted to Red 1 when Barry turned left for Paris, Gary led the way making sure we stayed on route. I have long since learned what a thankless job Red 1 is. Get lost and everyone complains, go too quickly and everyone moans, get it right and no one says a word.

Being responsible for the team whilst managing your own cycling, nutrition and hydration is no mean feet.

Gary’s happy demenor and general concern for the welfare of the team made him an ideal leader.

Gary we all appreciate your hard work and commitment to the cause thank you. 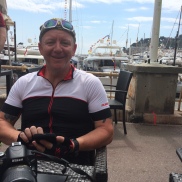 Every cycling group needs a Steve, always there ready and willing to help. His strength meant one minute he could be at the back encouraging us along, the next out front looking for a place to stop or a crop to forage.

He settled into the role brilliantly and provided much needed encouragement to the strugglers.

Always calm, always consistent, Steve on the outside would have you believe he is the strong silent one but we all know that really there is a naughty boy trying to get out!

As the groups First Aider Steve was always on look out for an opportunity to get his First Aid bag out and I was grateful when he patched me up outside Gloucester following an incident with the back of Paul’s bike and a street light.

A wonderful sense of humour and a willingness to get stuck in made Steve an invaluable member of the team. 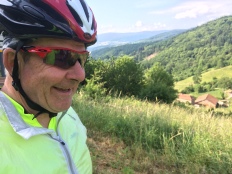 When I first discussed the idea of Wrexham to Monte Carlo with Paul his eyes lit up. I had no idea that they would stay like that throughout the whole adventure. To say Paul embraced the challenge would be a huge understatement. He absolutely loved it. As the elder statesmen (cycling), Paul never let that get in the way. Yes he will tell you that it takes a little time to get going but once at full speed he smashed it!

Every trip needs its hero, that one person who everyone looks at and thinks my god that is amazing. Paul you are a true hero, your continued determination without a single moan was an inspiration to me and to the others and for that I thank you.

I don’t have the words to adequately describe Mike to you. For those of you who know him well you will know that as well as being a great bloke, he also has a steely determination and a never quit attitude.

His pursuit of a cup of tea is legendary and I will long remember the joy on his face when in one restaurant they brought him a teapot and then the shear disappointment when he realised they had sent him a collection of fruit teas.

On a more serious note, there were times when he could have stopped. In fact every one of us told him to but he wouldn’t. He kept going even when the pain was so bad it made cycling unbearable.

It would be remiss of me not to mention the work Mike has done organising all the hotels, the van, the water amongst other things.  Despite some mocking (some of the hotels looked like prison blocks), he did a wonderful job and made our lives so much easier.

At times we would bicker like an old married couple but Mike and I have shared some great times and some great adventures and you will always be a true friend and a true hero to me. 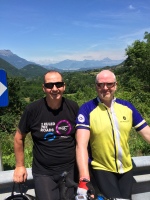 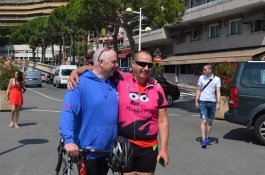 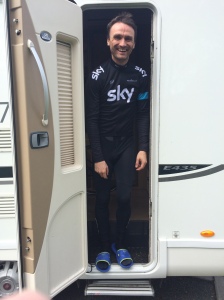 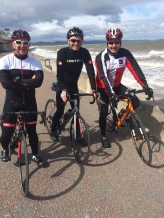 It is not the way Barry encourages or cajoles you on a ride, or even his empathy when you are on a hill, those would be traits of a good leader. Barry is not a good leader, he is a great leader.  He has a better understanding of your capability than you do. His ability to set the pace for a group of 5 mixed ability riders based on gradient and conditions is truly amazing.

The saddest part of this adventure happened before we started when Barry informed us that he couldn’t do the ride. Mike and I deliberated long and hard as to whether we should continue at all. We are never happier than when we cycle together mercilessly ribbing each other as only good friends can do.

We do make the strangest group of mixed ability cyclists and at times people passing must think that Barry is our carer!!

We were both delighted when Barry confirmed he could do the Wrexham to Paris section.

Barry performed as expected, controlling things as only he can. Sharing a room with them both in Gloucester brought back so many happy memories.

At one point that evening Mike set off for reception on a quest for more towels or teabags. As the door slammed shut we both looked at each other and said ‘he did have pants on didn’t he!’ During our last trip, Mike had been back and to to reception in only a shirt and underpants having forgot his trousers!

When Barry left us in Paris there was no real sadness, we had long since rationalised that we would go our separate ways. I phoned Barry as we cycled the last kilometre into Monte Carlo and we chatted as we turned the last few corners. It just seemed right that he should share in the experience, he was not with us but still a member of the team. 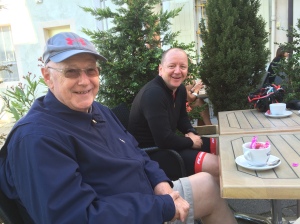 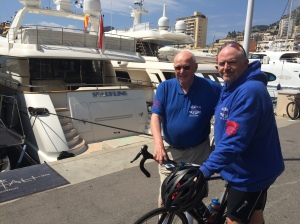 I couldn’t have been happier when dad said he wanted to come along as navigator. After all he has been my greatest inspiration in life. He has also been my biggest critic which helps keep you grounded.

After 110 miles one day I commented that I was exhausted he looked at me and suggested that if I couldn’t make it perhaps I should get in the van! No further motivation was required and I finished at 119 miles.

I think all of you know dad has suffered within Non-Hodgkin’s lymphoma for many years and he has fought several re-occurrences. I am proud to be able to raise money for a research charity that works to find a cure for an illness that has made him so poorly.

I am so lucky that I am able to share these experience with him and so pleased that everyone enjoyed spending time with him. I’m not sure I will miss the ‘where are you’ telephone calls when we were not where he expected us to be.

We are all so grateful to you for making this experience such a happy one, for providing the food and even preparing it. If I recall correctly the last time you made me a sandwich was in 1972! I have had messages from the entire team saying how welcome you made them feel.

As for me, I would like to thank every one who has supported us during this challenge. To our long suffering wives and girlfriends who listened intently to our moans and offered encouragement on a daily basis.  We are also grateful to Nia who helped so much with the arrangements and for also running base camp whilst we were away.

I will always cherish the memories of this week and the time we shared cycling together.

Just one question, where next?